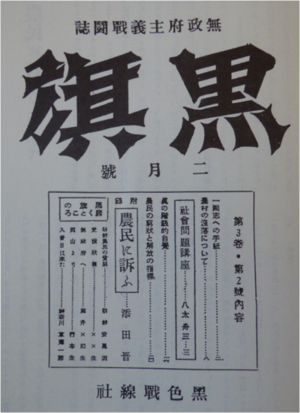 Anarchist theory and practice have global aims of liberation. In the late nineteenth and early twentieth century, anarchism furnished a comprehensive critique and analysis of state rule, capitalism and imperialism, and it offered alternative models of being in contrast to established regimes of power. As recent research has demonstrated, anarchist thought and practice was a modern and appealing intervention, also in anti-colonial libertarian struggles for liberation. Yet, how does anarchism play out in an imperial formation, Japan, in which anarchists were simultaneously subjugated to Western imperialism and its epistemological hegemony, but simultaneously positioned within a non-white imperial center?

This talk investigates anarchist theory and practice in the 1920s and 1930s Japan. Interwar Japan’s anarchists’ trans-imperial perspectives emerged from a modern critique of the present and the engagement with anarchist and/or communalist ideas and experiences in Asia, Africa, Russia, and Western Europe. The paper focuses on concepts and interventions of a rather unknown group, the Nōson Seinen Sha, highlighting a global consciousness even among anarchists, who did not become famous for their cosmopolitan adventures. Members of the group developed highly sophisticated concepts of liberation and implemented new forms of living in communal farming that challenged the forces of capitalism, imperialism, and increasing militarization.

In doing so, they simultaneously positioned themselves against established conservative and fascist agrarianism as well as Marxist dogmatism. Despite their repression by the imperial state, they offered a radical, universalist yet pragmatic way of being in autarchic farming village communes that corresponded with similar ideas and movements worldwide.

Robert Kramm holds a doctoral degree in history from ETH Zurich and is currently Freigeist-Fellow of the VolkswagenStiftung in the School of History at LMU Munich. At LMU, he is the principal investigator of the research group “Radical Utopian Communities”, and a member of the Munich Centre for Global History and the Young Center of LMU’s Center for Advanced Studies. Before coming to Munich, he was a post-doctoral fellow in the Society of Fellows in the Humanities at the University of Hong Kong and the Kulturwissenschaftliches Kolleg in Konstanz. His field is global history, history of everyday life and modern Japanese, European, and North American history with a combined focus on the history of the body, race and sexuality, and anarchism and communal life. His first book, Sanitized Sex, was published in 2017 by University of California Press, and he co-edited Global Anti-Vice Activism: Fighting Drinks, Drugs, and ‘Immorality’ (Cambridge University Press, 2016).

You are kindly requested to register with Zoom in advance: