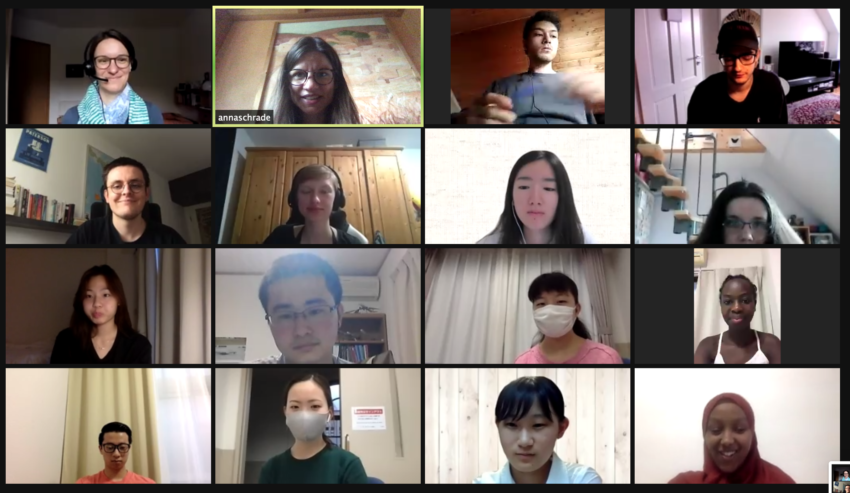 While the ongoing COVID-19 pandemic has physically and in some ways also socially distanced teachers and students, it has also opened up new possibilities to extend learning beyond the usual physical classroom. This is how in our Master’s class (Übung) on ‘Migration in Japan’ (SoSe 2021) led by Anna Wiemann, we took the chance to get together in a Zoom classroom with a group of BA students from the International Studies Department of Kwansei Gakuin University (KGU@Nishinomiya) under the leadership of Anna Schrade to jointly study and discuss migration issues in Japan and the EU ‘hands on’.

In all our 14 sessions, the LMU group and the KGU group shared the same topic for the day. Topics included labor migration of highly-skilled as well as in the care and agricultural sector, economic issues, integration (multiculturalism vs. assimilation), questions of belonging, civil society and migrant support, and refugees. The only difference was that the LMU students analyzed the topic at the example of Japan, while the students from KGU investigated the situation in the EU.

For about half of the 14 sessions, LMU and KGU students all first convened on Zoom for a ‘plenary’ session, where, after a short introduction to the topic, one LMU student gave a short presentation on a case study at the example of Japan. We then quickly discussed the main points before separating into two groups. While the LMU students continued with their discussion, the KGU students met in the breakout room to work on the EU perspective. To round up the session, we convened as a full group again and students from both sides summarized their findings and their discussions on the topic of the day in comparative perspective. 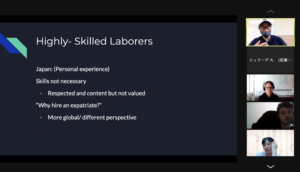 The discussions were always so lively and intense that we often ran out of time. We had many interesting deliberations about why the approaches and policies regarding migration, mobility and refugees in Japan and Germany were so different, and it made us understand the issues from different perspectives. The benefits of this comparative approach were nicely summarized by a Japanese participant:

Discussing about an issue relevant both in EU countries and Japan simultaneously helped me perceive different perspectives of the issues. Furthermore, since we had distinct backgrounds and values, I was offered an opportunity to hear and develop new ideas and thoughts. Through these discussions, I learned the importance of gaining an insight into how people of different nationalities, living environment and set of values think and I feel this would provide more flexible and creative resolutions to the challenges countries face in the future.

As you could sense from this report, our classes were highly enjoyable, and the joint format with Japanese students allowed us to get some direct insights into the Japanese mindset, without even having to leave our home. A great class, especially in COVID-19 times.

This is also the opinion of a KGU student, who pointed out that “this class was the best and the most creative one so far. […] I was positively surprised that holding a class via ZOOM with students from foreign universities actually works, and I hope this style of classes will be more common in the future.”

For their final project, six mixed LMU-KGU teams were asked to conduct an online interview either with a German migrant in Japan or a Japanese migrant in Germany. This equipped the students with useful experience in conducting their own qualitative fieldwork and led to interesting findings.

See how an LMU student perceived the interview with a young female Japanese who migrated to Germany for educational reasons and what he and his team found out:

Since it was the first time I conducted a qualitative interview, I always wondered how far we should go with our questions. […] A general question asked was if our interviewee noticed any cultural gaps, where she thought, ok wow, that’s really something Japanese people tend not to do. Now she has been living in Germany for 3 years, but especially the first year she didn’t notice much, apart from obvious differences even a casual tourist would notice, as she didn’t understand the language at all.

But as she slowly gained more and more language ability, she especially started noticing a difference in terms of expressivity and individualism. She said that she believes, that Japan tends to be much more collectivist, where one is also compelled to try to assimilate to Japanese society, whereas German society seems to be a bit more individualistic. […]

As I asked if she has had any culture shock, she answered that especially in conversation with German persons, going against her opinions was common. She recalled that in Japan keeping one’s opinion to oneself, especially in conversation with strangers or people higher up in hierarchy, is considered polite, while Germans like to start discussions with words such as “doch”. […] Basically, Germans are straighter in expressing one’s mind, even to strangers, so her finding.

The students also discussed the measurements and public response taken by German and Japanese government regarding the Covid-19 pandemic during the interview. The interviewee mentioned that the biggest difference she felt was the lack of public concern in Japan. This finding also fits nicely to her previous comments that the Japanese keep silent about their opinion and trust the government to provide a good solution.

This interview reminded the students of the concept of ‘honne’ and ‘tatemae’ in Japan, and how Japanese people tend to express themselves less, or pretend to have no/another opinion rather than confronting someone with their real thought.

At least in our class, the Japanese participants did not hold back their opinions, which was great and made the class not only very enjoyable but meant that we learned a lot from each other.