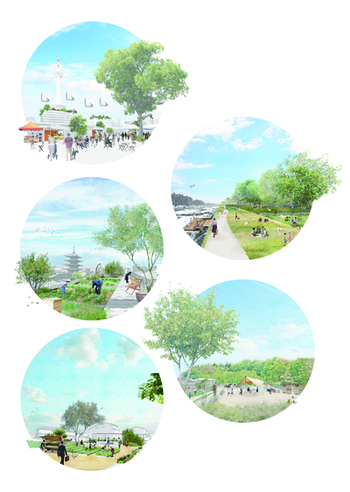 Take a moment, and imagine urban Japan of the future. Did you picture corporate-branded smart cities, driverless cars zipping about high-rises and vertical farms, all against a backdrop of distant hills with drones hovering over rice fields, small green patches within the niches of yet another mega-solar power plant — a society apparently humming along without so much as a person visible? Or did your mind take you on a haikyo tour of rusting, abandoned and overgrown infrastructure, partly flooded by rising sea levels?

Seemingly omnipresent, such visions of Japan’s future are surprisingly hard to set aside. In this talk, I draw upon recent research across sustainability, food and agriculture, as well as city planning in Japan to examine how the global struggle to imagine and build brighter futures plays out in Japanese contexts. High-level preoccupation with economic growth stands in stark contrast to post-growth realities on the ground, as well as to an emerging consensus in sustainability science on the need for radical transformation. Showcasing results of the five-year transdisciplinary research project FEAST, I discuss how alternative practices around food and agriculture (from agroecological farming to urban beekeeping) point towards a silent shift in attitudes and values — a shift also visible in how residents of shrinking cities think about urban futures.

A collection of landscape design concepts then offer a glimpse into possible tomorrows, not least inspired by the emerging Japanese discourse on degrowth. Concluding with some reflections about the changing nature of research in and on Japan, I argue that there has never been a more promising time, or urgent need, for collaborative research on Japan beyond disciplinary silos.

Christoph D. D. Rupprecht (him/his) is a geographer working on cities from the perspectives of food, agriculture, green space, solarpunk, degrowth and multispecies/more-than-human thinking. He received his MA in Japanese studies, philosophy and biology from Ludwig-Maximilian-University Munich in 2009 and his PhD in urban geography, planning and ecology from Griffith University in 2015. After working as a Researcher and Senior Researcher for the FEAST Project at the Research Institute for Humanity and Nature from 2016-2021, he is now a founding member and Director at the non-profit organization FEAST, as well as a Associate Professor at the Department of Environmental Design, Faculty of Collaborative Regional Innovation at Ehime University (Japan). Recent publications include the co-edited volume “みんなでつくる「いただいます」/ A feast of our making“ (in Japanese), the paper “Multispecies Sustainability”, and the co-edited solarpunk SF anthology “Multispecies Cities” published by World Weaver Press. Learn more here!