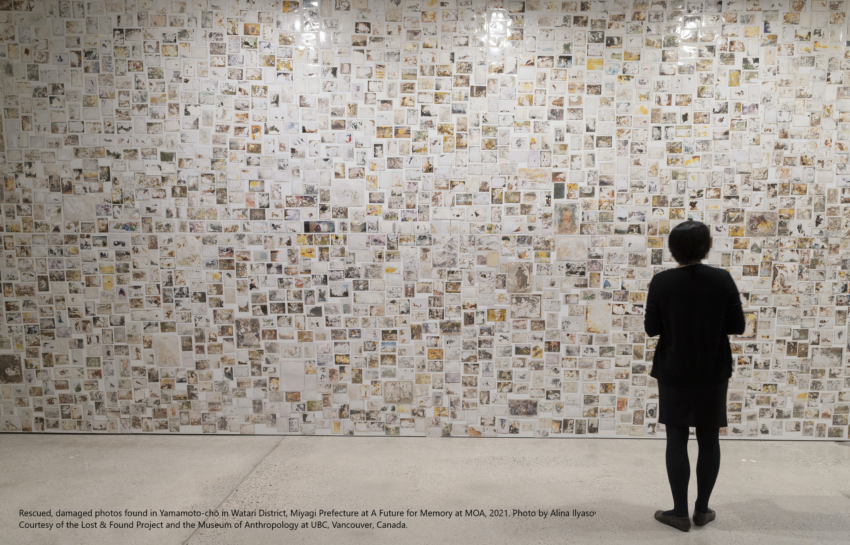 In March 2011, Japan experienced one of the worst disasters in its history. At 14.46 pm, a 9.0 magnitude seaquake shook the country and triggered tsunami waves of up to 20 meters in height at Japan’s northeastern coast (Tōhoku). Besides the vast devastation of the coastline in the prefectures Iwate, Miyagi, and Fukushima, the seaquake was also a factor conducive to one of the worst nuclear accidents worldwide at the Fukushima Daiichi nuclear power plant in the little towns of Okuma and Futaba, Fukushima prefecture.

10 years after the Great East Japan Earthquake (Higashi Nihon Daishinsai) or 3.11, in this presentation, we look at how artists and survivors have dealt with the aftermath of the catastrophe focusing on processes of memorialization through art and voice.

The first part of the event deals with the role of art and collaboration in the memory of 3.11. Fuyubi Nakamura will give an online tour of the exhibition “A Future for Memory: Art and Life After the Great East Japan Earthquake” she curated and which was held from February 11 to September 19, 2021 at the Museum of Anthropology at UBC, Vancouver (Canada). The second part deals with the question of voice in memorialization processes based on two student research projects. Under the supervision of Anna Wiemann, students transcribed and interpreted interviews with survivors in the small community of Minami-Sanriku (Miyagi prefecture) conducted in 2012 by students from the ‘Tōhoku kara no koe’ project and oral narrative archive lead by Prof. David Slater (Sophia University Tokyo). The second student group currently interprets an interview conducted in November 2021 with disaster storytellers, kataribe in Japanese. A commentary by Julia Gerster who researches the memory of 3.11 in Tōhoku for many years, bundles the two parts and completes the event. Julia Gerster participated in the ‘Tōhoku kara no koe’ project as a student herself and she functioned as a facilitator of the kataribe interview.

Dr. Fuyubi Nakamura (中村冬日) is a socio-cultural anthropologist trained at Oxford (DPhil 2006). She holds a joint position of Curator, Asia at the Museum of Anthropology (MOA) and Assistant Professor in the Department of Asian studies at the University of British Columbia (UBC). She is also Associate Member in UBC’s Department of Anthropology. Fuyubi specializes in the anthropology of art, museum studies, and material and visual culture studies. She took a leave from academia following the triple disaster in Japan in 2011 and was involved in relief and recovery activities in Miyagi Prefecture, and continues to do research about the aftermath of 3.11.

Dr. Julia Gerster received her PhD in Japanese studies with a disciplinary focus in social anthropology at Freie Universität Berlin in 2019. She currently works as Assistant Professor at the Disaster Digital Archive at the International Research Institute of Disaster Science (IRIDeS) at Tohoku University. Her main research interests include the dynamics of social relations after disasters, community building, collective memory and the handling of negative heritage.

Dr. Anna Wiemann is Assistant Professor at the Japan-Center at Ludwig-Maximilians-Universität München (LMU). Her main research fields are social movements, civil society, social networks, and collective memory. She regularly conducts research-oriented MA classes based on a range of empirical data.

Please register for this event on Zoom. After registration you will receive an email with the link to the meeting.